On the evening of Day 3 (1 was spent in the LAX terminal and 2 was lost on the Date Line,) we rode into the Cape Trib Beach House, at the very end of the road. We were met with a nice reception and were assigned to our cabins. The guys in our group shared one named the “Endeavour” (a nice touch) and it had two bunkbeds and one regular one. The accommodations were serviceable and the atmosphere incredible, but there was one detail that interested me. We had to put all sugar items in a separate fridge in the kitchen, because a sign on the door informed us that some type of marsupial in the area hunted for sugar, and in the past, they had dug through the wooden doors in order to reach the snacks in the rooms. I do not know if this was true or not, but I complied and spent more time figuring out how to operate my international phone charger adaptor into the wall. 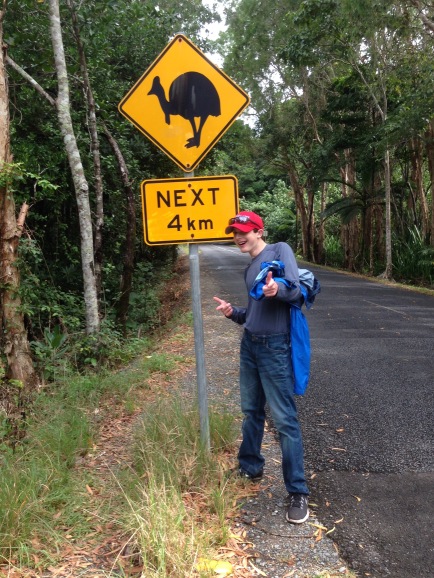 Waking up on the morning of the fourth day, I was determined to knock the “Cape Tribulation” entry of the 1000 Places book off of the list. The book itself had not specified what it called Cape Tribulation, but I inferred that it must be the surrounding area on and around the cape itself (you can see it jutting out of the picture on the right side.) This is an important location, not only because is it where two of the world’s most critical ecosystems converge, but because here in 1770, explorer Captain James Cook and his ship, the Endeavour, struck a coral reef that lodged itself into the vessel’s hull. The crew was forced to land until they could repair it, which they did, but Cook was still upset and as a result named it Cape Tribulation because “here began all my troubles.” Cook would soon after go on and become the first European explorer to see the Great Barrier Reef. Anyhow, we proceeded to a fantastic beach right on the property of the Cape Trib Beach House for breakfast, and had a look around. I was aware this was a beach on Cape Tribulation, but later in the day I discovered that it was in fact Cape Tribulation Beach. It was outstanding, a stretch of empty white sand looking out into the ocean surrounded on both sides by tropical green hills smothered in bright trees. If you peeked out to the right, you could see the Cape itself. In the early morning sunlight, with the whole beach deserted, the sunrise over the water was fantastic.

(Here’s a photo of one of my tour group mates, Henry, in a panoramic shot. I think I tried to take another one, but it looked like the beach was folding in on itself in a Doctor Strange -style scene. Anyways, it does a good job of displaying the Cape itself, which peeks out in the right.)

We set out for the day to do a nature tour. Even though it was the “dry season,” the rainforest was wet and our vehicles (the only mode of travel,) made an arduous trek around the forest. Somehow, we went to the wrong group, and some guy there just did an impromptu tour unbeknownst to us. Meanwhile, the group we were scheduled to go with was waiting, and when one of their employees met up with us on a trail, she seemed frustrated. We spent about two hours with that guy without realizing there was a case of mistaken identity occurring. We did, by the way, enjoy our time. We were able to see four cassowaries, which we had learned about, on the way to one of our next attractions. A cassowary is a colorful, endangered red-and-blue bird found mainly in the rainforests of Northern Australia. It looks like a cross between a peacock and an ostrich. We stopped near a bridge to see a cassowary and its three children crossing a stream, and it was incredible. Seeing the red throat and that weird feature on top of its head made the encounter all the more intriguing.

We saw more prehistoric creatures on a wildlife cruise of the Daintree River. The cruise port was on the riverbank, behind an obstacle course of growing mangroves. It felt like a ride on Walt Disney World’s “Jungle Cruise,” but in a positive way. The boat traveled up into the streams, surrounded by the plants and trees of the world’s oldest rainforest. We unmoored at the very spot where the Daintree River emptied out into the sea, and motored upriver to several spots where crocodiles lurked. (I don’t remember if they were saltwater or not, but rest assured, saltwater crocodiles do live in the area. That’s why no one swims at Cape Tribulation beach.) I could see how the mangroves reproduced, and the clouds ramming the dark green mountain peaks overhead. We spotted a couple in separate banks, where they basked and moved a little bit. One might think seeing one or two is not impressive, but believe me, it’s neat.

After the tour, it was a quick drive to a beach right next to the mouth of the river, where people lounged and hung out, almost like a beach that wasn’t close to massive crocodiles. For me, my favorite part of this stop was on the trail leading to the beach. It was a post with a tube with two bottles of blue vinegar “for use on marine stings.” For jellyfish stings, vinegar is used to stop the damage. Our guides engaged us by pointing out that the vinegar was dyed blue. Why? Because Australians, having come from a former British colony, would pour regular-colored vinegar on their fish and chips, so when someone could get stung, they ran the risk of not having any vinegar left for themselves. So to deter people from using the medical supplies as a condiment, they gave it an unappetizing color. How practical! 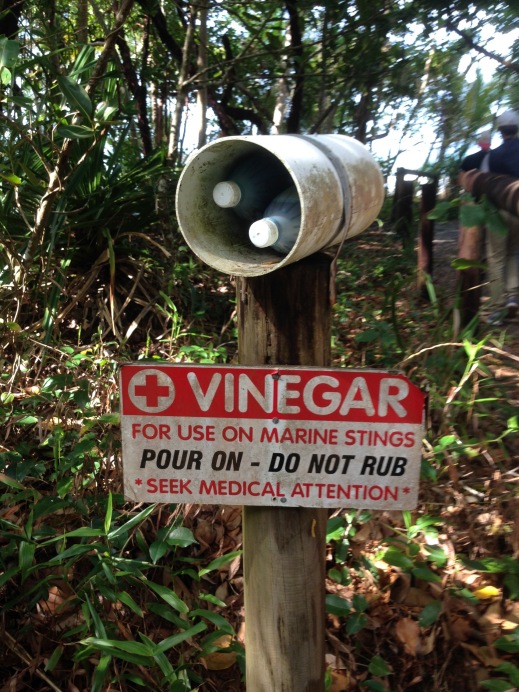 We did a service project where we planted small trees into the ground in efforts to preserve the rainforest, which was a nice way to contribute to the rainforest that has outlived so many years. Whether sheltering endangered species or concealing potentially game-changing medicinal plants, the Daintree holds many practical purposes and should be kept prosperous for many more visitors to come. We were able to see the grassy rainforest from the nearby Daintree Ice Cream Company, with an orchard and seasonal menu. We sampled four flavors, including banana (which had a thicker, more solid texture,) strawberry, yellow sapote, and wattleseed, with a distinct coffee-like flavor. I recommend this place, because it offered an insight into local and unfamiliar flavors in an outdoor environment right next to where they were grown.

With our day in the rainforest coming to an end, we returned to the Cape Trib Beach House and spent the night, the gorgeous canopy up above. It was a perfect day out in the wilderness, sampling exotic flavors, spotting animals in their natural habitats, and seeing breathtaking vistas over Cape Tribulation. I recall that when I originally ranked this sight in my book, I gave it a 4.5 out of 5. But it really deserves a flawless score. Cape Tribulation, the meeting place between the reef and rainforest, is an unforgettable, remote trek to a natural wonder everyone should visit. I must go back the next time I visit Australia, because you don’t hear that much about the Cape, even with its natural and historical significance. Even though Cook’s troubles began here, mine practically ended. All you need to worry about here is the rain, drying your clothes, and perhaps a lengthy reptile performing a stealth takedown on you while you admire the view. But as long as you keep an eye out, stay away from anywhere near the water’s edge, and don’t go out alone and/or at night, you should be fine. Just don’t hold me liable, because people have been eaten here in the past. Those warning signs aren’t there for decoration!