On our second morning in San Antonio, I attended a short business function and was soon available to explore the city. With no solid itinerary planned, we decided to push the boundary of the River Walk and check out the Alamo, which is to the east of the River Walk and about a five minute walk. The Alamo is the symbol of Texas and its independence, where in 1836 a large group of Texans who wanted to break away from Mexico fought against a massive army of Mexican soldiers.

In 1718, because of the French colonizing New Orleans in Louisiana, the Spanish decided they had to stop France from moving westwards into the continent. So they sent groups of missionaries north into Texas to colonize it. These missions were intended to stretch along the south of the modern United States, and although it never came to fruition, these missions were influential in Spanish colonialism. They set up several missions in the center of the area and named it San Antonio de Bexar. These missions were important as trading posts, centers of religion, and to convert local populations. After awhile, Mexico broke apart from Spain and it fell under their control. But Mexico needed people to use the land, so they invited Americans to come on in and make new homes on the land.

The problem was that the new Americans and Europeans didn’t want to conform. They broke a bunch of rules, and acted like the Mexican law didn’t apply to them. So there’s a huge issue for Mexico; they wanted all of these people to come, and now that they got what they wanted, they changed their minds and wanted them to leave. Eventually things became real and Texas decided to declare its independence, and the Texan Revolution started. Now, all sorts of figures entered Texas and decided to fight Mexico. You saw people like Jim Bowie, Davy Crockett, and William Travis challenging Mexico and fighting them. And then all of the Texans went to San Antonio and made camp at an abandoned mission known as the Alamo, setting up ditches and cannons.

The head of Mexico, General Santa Anna, was really mad because he hadn’t expected so much resistance from a group he had thought was made up of farmers with pitchforks and shotguns. He summoned a huge army of several thousand men and sent them up to San Antonio where they met the Texans in the Alamo. What resulted was a battle of epic proportions between the Texans and the Mexicans at the Alamo. There were cannons, guns, walls, and bayonets everywhere. The women and children were put in the church and the soldiers fought along the wall. The Texans fought hard, and the Mexicans sustained heavy casualties, but Santa Anna’s soldiers eventually clambered up ladders along the side of the walls and turned the cannons on the Texan soldiers. When all was said and done, most people were killed.

Tensions ran high in America, where they’d heard about the battle and read the William Travis “Victory or Death” letter. And the Texan army, led by Sam Houston, were filled with passion. The climactic battle of the Texan Revolution, the Battle of San Jacinto, outside of modern-day Houston, lasted eighteen minutes. Afterwards, the Mexicans fled, but the Texans screamed “Remember the Alamo!” and chased them down.

After that, Texas spent the better part of a decade as its own nation, something most states can’t claim. Soon, Texas joined the United States, which led to the Mexican-American War, which is in itself a long story. So that’s the Texan Revolution summarized in several paragraphs. If you want to see the names of the Alamo defenders, go to the nearby Alamo Cenotaph. It’s a stone monument by the Alamo with the engraved names of all of the fallen soldiers, which rises up into the sky.

We arrived at the Alamo, on the plaza where you could see the front of the Alamo church. If you look at the front, the ridge on top of the facade was added long after the battle. Before, it was flat across the top. I believe this is because the Alamo was used as a warehouse at one point, so I believe it was added on to cover up the roof. We walked to the Alamo and entered it through the church, where we entered this interior through the front wooden doors. Inside, you have to remove your hat and refrain from photographs. It is like a ceremony inside; you can see how the Alamo has become legendary in the state of Texas. There are plaques and flags, as well as windows where you can look inside. I learned how there were traces of gold leaf found inside the Alamo as decoration from its mission days. A funny part was reading about how, during its stint as an army warehouse, “historical graffiti” was left on the walls. On the way out, we saw the church chamber where the women and children hid during the siege. Outside, there are restores barracks, beautiful green spaces, and a well-stocked gift shop containing plenty of coonskin caps modeling the one worn by Davy Crockett.

In all, the Alamo was an enlightening experience. From its colonial beginnings to the fight that inspired and formed a nation, this well-maintained, beautiful, informative space is perfect for an aspiring historian. And close to the River Walk, it is a lovely place to spend an hour and hang out. You know what the craziest part of the experience was? It turns out the church was at the back of the mission. Most of where the battle was fought is where buildings and several paved streets now stand. When you cross the street, you are walking over where the battle that changed American history was fought.

I think I should explain why I recall so much about the Alamo. Well, the first time I visited my parents took me to see this movie at the nearby RiverCenter Mall to learn all about the battle. I left the movie theater crying because I kept “waiting for the good guys to win.” I was very distressed at the time.

After the Alamo, we walked back to the River Walk and ambled on the southern side. The banks, especially around midday, are tranquil and less frequented by tourists. We ate at Casa Rio, the oldest restaurant on the River Walk dating from 1946. The salsa was excellent, and it was there where I bought my first Fiesta Medal. Since this was the second day of Fiesta, San Antonio’s eleven day festival, we saw people wearing hats and vests adorned with strange medallions. This is a Fiesta tradition. The aim is to collect as many medals as possible from local establishments to appear like a general, well-versed in partying and doing whatever one does at Fiesta. I purchased one for Casa Rio, and felt like I was on my way to understanding the ways of Fiesta. 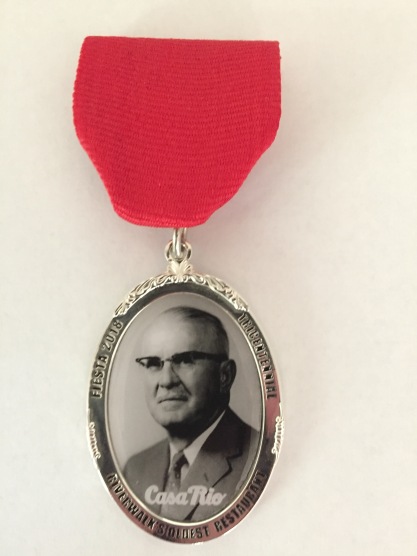 We decided to follow the advice of the 1000 Places book, which recommended we proceeded to Market Square, which was several blocks west of the River Walk. Walking along the south bank, we passed a beautiful sculpture garden, and swooping trees sheltering waters in which ducks swam. It is empty all day long. There is a terraced amphitheater you can also walk along, and the stage is across the water from it. So we walked until the River Walk ended and we kept walking, sometimes moving faster than the passing barges. We made our way west, and came upon an old structure. This was the Spanish Governor’s Palace, a colonial building reminiscent of Santa Fe. Inside, we could see pictures and maps of Spanish territories. You could see how all they had for entertainment were instruments such as harps, and check out all of the old furniture. There’s also a neat courtyard you could see. By and large, our coincidental detour was a nice surprise. 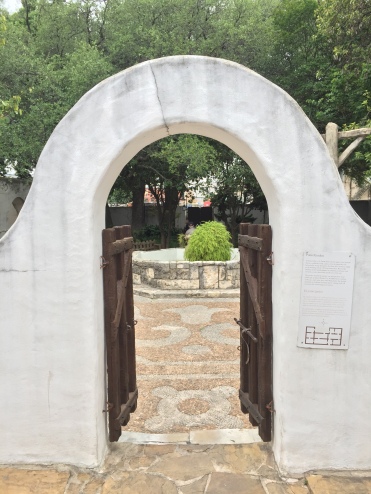 But we eventually came to Market Square… and it was like stepping into another country. It is a square full of food stalls, michelada stands, and shops featuring tons of useless toys and souvenirs. It’s great. There are multicolored banners and flags crisscrossing the plaza, and banners celebrating Fiesta. It was in full swing here. There are people in festive hats with fiesta medals dangling off of the brims. We saw ladies with floral halos consisting of multicolored flowers. There are people with gallon-sized glasses drinking micheladas- and not even sharing. It was insane to see one person consume that much alcohol. But the best part was when the bands played great fiesta music with accordions. Between two of these bands there was this one guy who was on drugs or something and was dancing around while the music pumped out of the speakers- with his underpants sticking out. He was having a great time, and so was everybody else. 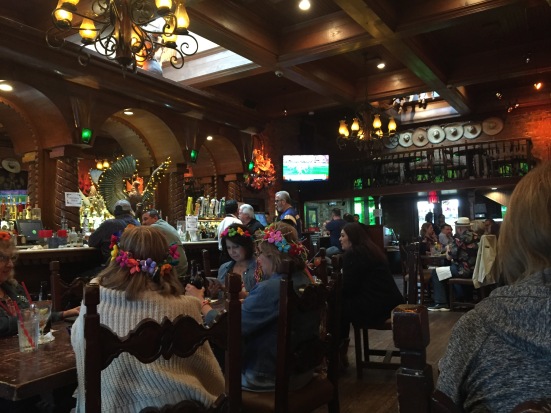 The book recommended we check out Mi Tierra Cafe and Bakery, right in the center of it all. It is stuffed to the brim with patrons, and the ceiling is covered with colorful piñatas, and if you look up you can see “Hecho En Mexico” stickers on the bottom. This cafe is the real deal. The lines are long. There is amazing Fiesta merchandise everywhere. The glass cabinet the food is behind hides all sorts of strange Mexican desserts. It helps to know Spanish when ordering, because it’s important to know what you’re getting. There are mysterious desserts, layered cakes, and baked goods filled with fruit filling. We got a guava pastry and what looked like an apple turnover, which we ate in the adjacent bar. It was great and I have to go back next time I’m in the city. The bar was also fun to see, as there were parties of people celebrating the Fiesta.

The most commercial area of Market Square is the El Mercado, which is said to be the largest Mexican Market outside of Mexico… now that I think about it, wouldn’t it be strange if the largest Mexican Market in the world wasn’t in Mexico? Anyhow, when you go inside this place, it’s a warehouse stacked to the top with shops featuring Mexican dresses, ceramics, and paintings. There are tons of stores, ceramic tiles, T-shirts sporting images of Fiesta, and handbags featuring the late singer, Selena. (I believe the opening shots of her song “No Me Queda Más” were filmed at the River Walk.) I also noticed memorabilia picturing another artist- Frida Kahlo.

Frida Kahlo was an artist based out of Mexico City, known for her unique style, imagery, and relationship with Diego Rivera, another esteemed Mexican artist. Today, many people only know her because of her massive unibrow, unfortunately. In El Mercado, there was a large amount of merchandise dedicated to her. T-shirts, coin purses, paintings, dresses, ceramics… all feature her self-portraits, especially the one with a monkey on her shoulder. I can’t comprehend why she would have such a big influence on a market in Texas. I will say, however, it was neat to see her art so widely received and on so many surfaces. It added a whole new layer of culture to the Mercado, and her unique color schemes made it all brighter and in-tune with the lively Fiesta.

Returning from the festive Fiesta, it was a great opportunity to reflect on the awesome celebration of San Antonio’s cultural and historical heritage. And with all of it close to the pleasant River Walk, it made for a great day out among barges, pastries, and decorations.