Ugo and I walked from his house to the French high school, where the youth ambassadors were set to present on Texan culture. After a question and answer session, we took them all outside and invited them to play with a piñata, a traditional Mexican party game featuring a dangling cardboard object filled with candy that is opened by having a blindfolded participant whack it with a stick. The teachers suspended the piñata over a tree branch, handed the students a hollow piece of pipe and a blindfold, and let them at it. It was amusing to see French students play around with the thing. When somebody hit the piñata once, they stopped hitting it and took off the blindfold and instead handed it to someone else. The usual event has one person thwacking the cardboard until it bursts and candy rains down over everybody, but they thought they needed to take turns. The most interesting action the French students took was, however, when the piñata finally broke apart and American candy spilled all over the courtyard of the school. In America, kids would be toppling over each other to seize the sugary candy seeping out of the mutilated piñata, but not in France. The unfamiliar French kids looked at the candy, and only a few picked the candy up. Maybe France warns kids not to take candy from strangers more than in the US, who knows? But the point got across and most everyone had a good time.

At about 1:00, or 13:00 in France (anything past noon is twelve plus the number of hours,) we set off to admire the historical center of Nîmes on a walking tour after meeting with the mayor in city hall for a brief ceremony. Nicknamed “The Badge” because of its unorthodox shape, the old town of Nîmes is, unsurprisingly, old. We passed an old church with stone walls, and strolled across plazas lined with umbrellas and patio chairs. There were both small, local shops and major, renowned businesses parading beneath awning-crowded streets. Many people in France smoked cigarettes, supplied by tobacco stores that advertised with small signs depicting cigars. Another thing I noticed was the air.

Unlike the United States, where air conditioning is almost mandatory, in France there is no circulation inside homes. It feels stuffy, and even inside homes and shade I still sensed myself sweating. Because of the June heat, I began to realize that most everyone here in the South of France opens their windows, a minuscule cultural difference I found intriguing. Unlike in America, where nobody opens their windows because of pesky insects and fears of having houses robbed, windows are open here constantly to let air in and out. Whenever I played video games that focused on parkour, I always had my characters jumping through open windows on rooftops, which I thought was improbable. Even in restricted areas that required stealth techniques windows were left ajar, as if waiting for a third-person video game player to leap through. Isn’t that stupid to leave windows open, I wondered. But as it turned out, it’s commonplace to leave windows ajar and gaping open. If anything, I would say that open windows made the squares more lived-in and local. Sometimes you could even see locals leaning out to take a smoke or get a breath of fresh air.

We arrived at Nîmes city hall, which was a beautiful structure with an interior courtyard lined on all four sides by open windows and stone facades. We briefly exchanged speeches and shook hands with the mayor, showing each other gifts and expressing magnificent intentions to the future between our two fair cities. After the meeting between city officials and the youth ambassadors concluded, we were escorted downstairs and given time to examine the courtyard. But perhaps the most interesting thing in city hall was not in the courtyard, but rather adjacent to it. To the left of the courtyard is a staircase, and if you look up, you can see a terrifying sight dangling from the ceiling.

Hanging from the ceiling of Nîmes city hall is a quartet of  scaly crocodiles, stuffed with straw and suspended above the stairs, smiling with sharp teeth visible. These are actual crocodiles brought here by merchants during the Middle Ages. Nîmes is famous for crocodiles; the city logo is a crocodile chained to a palm tree. Although the city does not own any crocodiles (unless somebody bought one as a pet and flushed it down the toilet, as popular US legend says) the city has become synonymous with the reptiles since they were a symbol of Roman power in the region. The city logo and iconic crocodiles stemmed from a design on a coin commemorating Augustus’ victory of Cleopatra and Marc Antony in 31 BC. (I believe soldiers from Ancient Nîmes participated in the fighting.) The Battle of Actium served as the final nail in the coffin for Antony and Cleopatra. In 1535 Nîmes adopted the design from the ancient coin and it has been the symbol for the city, on everything from shirts, hats, and brochures to the tops of those poles in pedestrian areas that keep cars from driving through. The crocodile has become an icon in this French city. I had a great time running of the stairs and photographing these four crocodiles as they swam in midair, jaws gaping open.

Outside of city hall, we met our tour guide for the afternoon, who would take us through the old town and show us the best sights. I saw the character of these charming old town streets; narrow lanes and alleyways, colorful awnings and bright cafes, open windows, sloping roofs of French villas, calm storefronts and people settling down for lunch. We passed by the 2,000 year-old Roman Arena, a stone arena with two levels of arches in the center of town. The guide showed us a carving in the stone on one of the levels, which depicted a pair of fighting gladiators. In Roman times, gladiators fought in this are- even though they weren’t killed, there were plenty of fights against animals. Instead of Rome’s leopards and lions, they fought against local animals such as bears. The carving shows two gladiators clashing. The one on the left is in a defensive position, crouching, looking up with one arm drawn. On the right, the other competitor has legs spread apart, one hand striking down. It was fantastic to see this small etching on the arena that brought its legendary past to life.

A short walk took us through more of the historical quarter and onto a plaza marked by the ancient Maison Carrée, which means “Square House” (the word “rectangle” was not invented yet). This ancient Roman temple, which is a structure lined with tens of elegant columns and a triangular roof. We walked up the steps and inside through a pair of towering doors, and into a lobby where we entered a huge audio-visual presentation on a screen. We sat down on some seats and watched a brief film on the Roman heritage of Nîmes. Back in Roman times, ancient warriors from the area where Nîmes currently is fought alongside Julius Caesar to dominate the tribes in the North of France and Britain and defeat the nearby city of Marseilles. Years later, Emperor Augustus granted the people vast amounts of money to return to France and construct a grand Roman city. They returned to the South of France and went on to build Nemausus, a metropolis that would eventually be known as Nîmes. 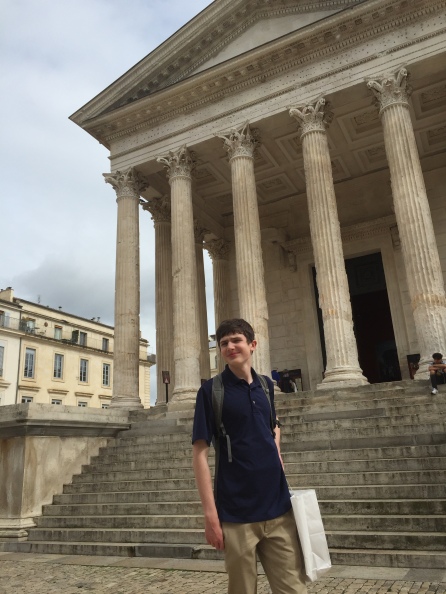 In Nemausus huge walls were built, as was the Arena for Roman entertainment. The Pont Du Gard aqueduct, perhaps the world’s most recognized aqueduct, carried water to the city. And in the very spot where we viewed this film, the Maison Carrée was built as a temple. If you look at the top of the temple’s exterior you can see an array of holes in random spots on the temple’s front. These were holes from which letters spelled out in Latin that the temple was commemorated to (if my memory serves me right) the two late grandsons of Emperor Augustus. In later years, after Rome fell, the city shrunk, and the Maison Carrée stayed preserved as it was used as an actual home in medieval times. That is what kept the temple in such pristine condition; its frequent use prevented it from being torn down or eroded like other magnificent Roman monuments, which make it one of the world’s best, most well-preserved Roman ruins.

The tour ended outside the temple, and Ugo took me back to his house. There we ate another fabulous dinner finished off with some fresh, juicy cantaloupes. It was a glorious introduction to the city of Nîmes, a place we would see more in the following week. But what I was looking forward to was the next day’s excursion to the Camargue, one of Europe’s greatest wetlands.