From Nîmes the youth delegation and the French entourage boarded a tour bus and embarked on the hour-long drive to the Camargue, one of Europe’s most important ecosystems. The Camargue is a huge area of swamps, marshlands, and wetlands spanning a sizable amount of Southwest France. While on a map it appears politically part of Provence, culturally it plays a role in both Provence and neighboring Occitanie (foremerly Languedoc-Roussillon), where Nîmes is located. The bus crossed the Petit Rhône and entered the Rhône River Delta. We were in the Camargue, heading towards the Mediterranean Sea. Our destination was Stes-Maries-de-la-Mer, the capital of the Camargue.

I knew we had entered the Camargue once I started seeing water-filled rows of grass and vast grasslands, then pastures of wild white horses native to the region. I saw one of them freely urinating while standing up, and another lying on its side. We passed by old villages and rows of tall trees towering over the bus. A diminutive road kept us in a southward direction until we entered the town of Stes-Maries-de-la-Mer, on the edge of the Mediterranean. Small shingled roofs and patios decorated the lanes of the town, all below the shade of the Romanesque church that dates from the 12th century. We drove around a roundabout that bordered a small wall proclaiming “Welcome to the Saintes Maries De La Mer Capital of the Camargue” in French. 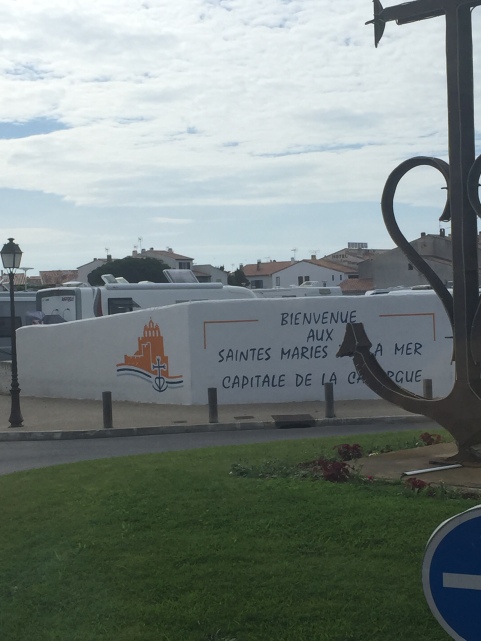 We parked in proximity to the bullfighting arena, and used some public restrooms nearby. The guide from the tourist bureau met our delegation and spoke to us about the neighboring arena. He informed us about how bullfights here in the Camargue are a different style than those one would see in Madrid. The Camargue is home to bulls that specialize in combat inside arenas like this. In Spain bulls are stabbed to death by bullfighters, a process that has made the sport controversial. However, although I’m almost certain there are fatal bullfights in the Camargue, Camargue bullfights always end with the bull surviving. The object of these games is for the agile bullfighters to grab a ribbon hanging between the horns of the raging bull. To me, it seems that Camargue bullfights are equivalent to flag football in a sporting sense. 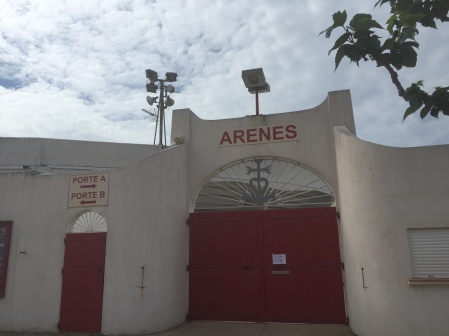 From the square in front of the arena, we walked across the parking lot to a landing overlooking the Mediterranean. I thought I could even spot some hulking container ships on the horizon. The guide talked about the effects of erosion on the Camargue, and how sediments affected the shores in the region. Next, he led us through the town center, with tacky souvenir stores and strange display cases flaunting postcards, magnets, and swimsuits. These surrounded the center of the village, and the centerpiece was the town’s Romanesque church that stood like a fortress above the shingled rooftops and gardens.

This church was built to commemorate the town and the people that gave the town its name. According to local legend, in the year 40 AD a rowboat full of early Christians was set adrift in the Eastern Mediterranean without oars or sails. Several important women on board were named Mary, including Mary Magdalene, washed ashore in this town. Thus, the name of Saintes-Maries-de-la-Mer was born. Also aboard was Sara, who was said to have collected alms for the poor. Even today, she is honored by the Roma people, who visit and celebrate her at an annual pilgrimage. 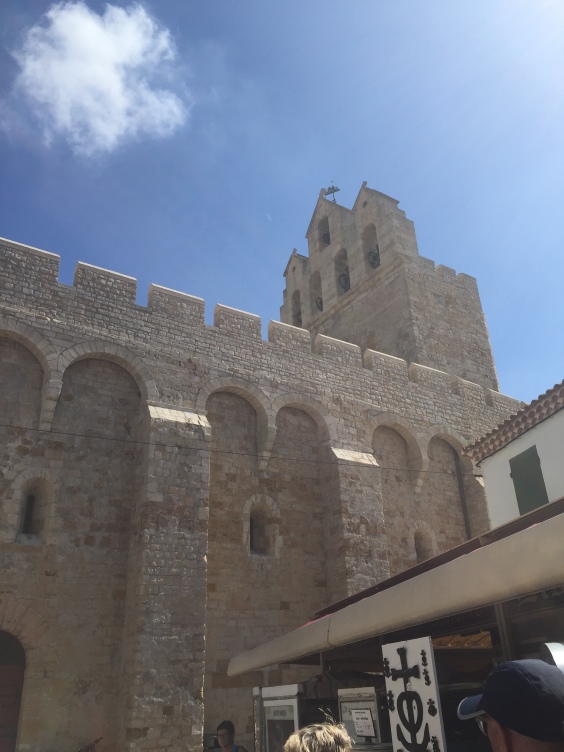 Inside the 12th century Romanesque church, it was dark and felt fortified. Which made sense, because it in fact was built to double as a fortress in the event of a siege. A short walk down a stairway brought into the dark crypt, in which the relics of the saints are said to lie. Inside, there was a statue of Sara, as well as several tiers of flickering candles that added to the already atmospheric feel of the crypt. It was fascinating to learn about local churches and traditions firsthand in this rural part of France.

If I saw it correctly, the counselors paid the admission fee for us all and we were allowed up an intimidating spiral staircase that exited onto the church roof. To our left, we were able to scramble across the aged shingles that led up the side of the roof. Here you had a brilliant view of the church’s bell tower, and a view of the town, the plaza, the Mediterranean, and the swamps and marshes of the Camargue. Our guide said we could see up to ten kilometers, and it sure felt like it. 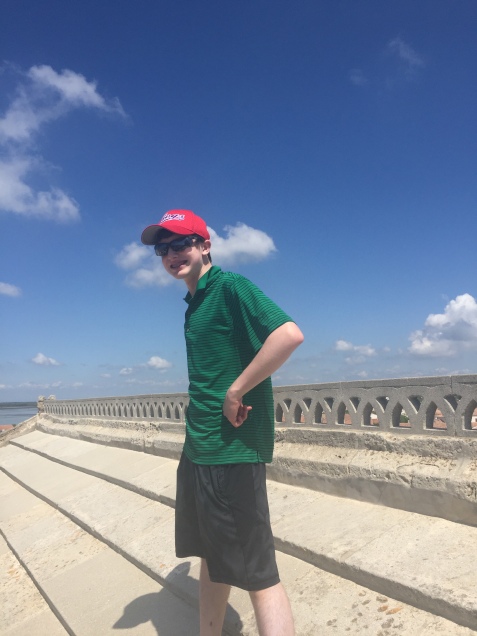 Heading to a nearby Mediterranean beach, we had a picnic by the shore. I walked to the surface to put my hand in the water, but before I knew what was happening a surging tide came up and drenched my tennis shoes. Before long we were back on our rented bus, heading into the interior of France. I want to go back to Stes-Maries-de-la-Mer, but next time, I’ll have to be more careful with the tides. 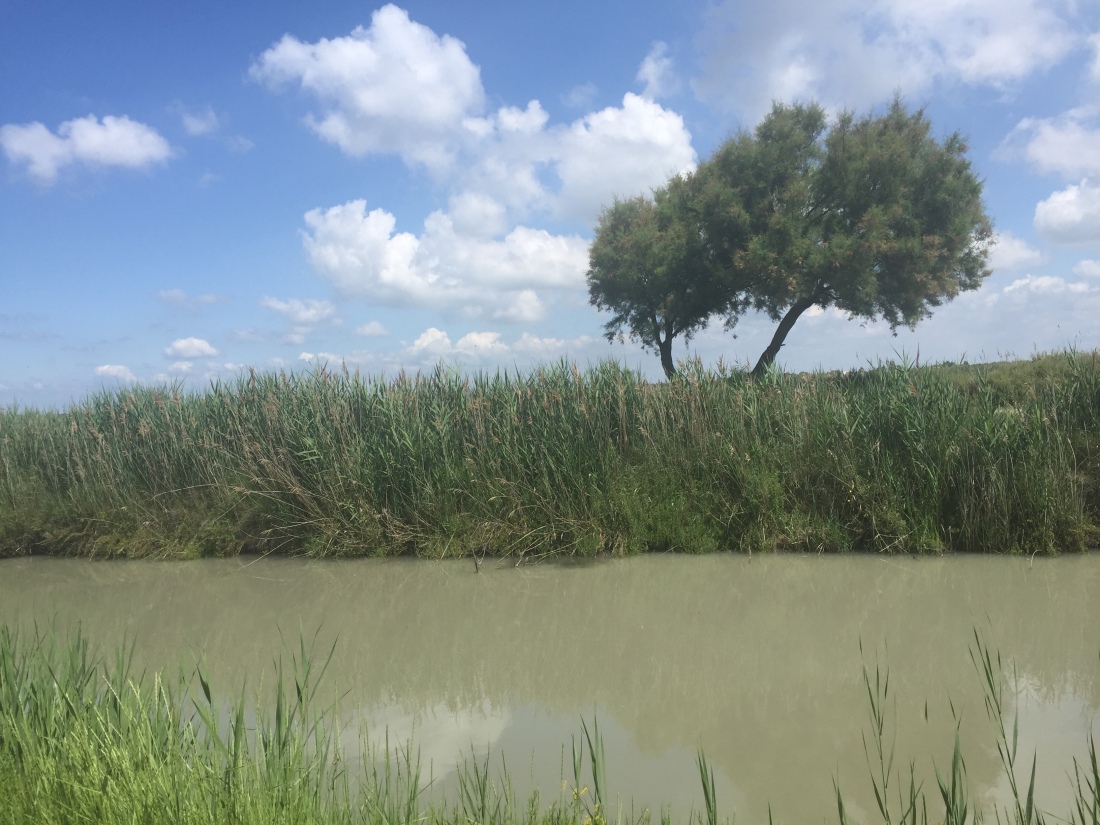 But for now, the bus wandered up rural roads on a quest to interact with some of Europe’s most incredible fauna.