Austin Airport was so poorly organized that it was an embarrassment. I will admit they did have a substantial choice of dining options and convenient shops, however we took issue with the gates. The problem was, they put two London-bound gates together; one for London Gatwick (our destination,) and one for London Heathrow. There were few chairs, no dividers, and massive crowds. You couldn’t tell which line was which, and it was made even more difficult by an arriving flight from Cincinnati pushing through the throng. The audio announcement intercom was broken, and at one point we thought our boarding class had been called, so we pushed all the way through only to hear they had named a different class, whose name had been jumbled up so badly by the sound system we were mistaken.

Austin seems like an odd place to embark on a European voyage, but Norwegian Air was offering direct flights from the Texan capital to the British capital. Our itinerary had us landing at Gatwick Airport, which was situated halfway between London and the English Channel, and taking a train ride to London, where we would take the once-daily Eurostar train to Disneyland Paris. These were all tight connections, so it was imperative we arrived in time.

The flight arrived in time, and we left customs early, having our passports stamped with a seal confirming our UK entry. Gatwick Airport was easy to navigate and helpful staff allowed us to get onto the train platform with our pre-booked tickets. Our train was due to depart at 8:45, but I was pleased to see we were leaving the airport a half hour early.

The problem was, although it was headed in the right direction (terminating at Bedford,) we had accidentally boarded the wrong train, slower than our scheduled one. It was not encouraging to see faster trains storming north past us, however the views of small town England were present. The deadline was looming; the train to Disneyland Paris was set to leave at 10:14, and we still had to go through security and passport control.

The potential for missing our train went into the back of my mind as we charged through a tunnel and neared a legendary city- London, the capital of the United Kingdom and the heart of a monarchy. My excitement peaked when, amid rows of skyscrapers, I could see the dual towers of Tower Bridge spanning the Thames River. Next to that, much smaller in comparison, was the Tower of London. Looking left, the London Eye was large over the south bank of the river, and in front of us was the dome of St. Paul’s Cathedral dominating the City of London. The train crossed the Thames with good view of the Tower Bridge in the distance, then went underground. We disembarked under St. Pancras International, the station where the Eurostar trains for the Continent entered and left.

Rushing through the terminal, we made it through security, bag checking, and passport verification before scampering up a ramp and onto the platform, sun shining down through the barrel-arched glass ceiling. A long train waited at our platform, and with mere minutes to go we hopped aboard our carriage with a window seat. Waiting for a few minutes, I checked my phone screen. It was 10:14, the scheduled departure time. I opened the clock app and looked at the clock face, the second hand inching closer to the 12. And then, seconds before the next minute, at 10:14, the carriages rattled and the engine pulled out of London, headed northeast. Right after we began to move, it became 10:15, and our tour had just begun. 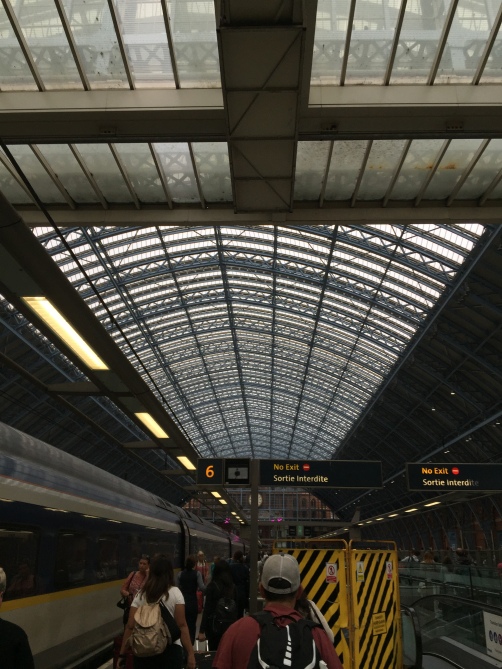 We moved past a construction site and immediately turned into English countryside. The train made brief stops in Ebbsfleet and Ashford, two towns in southeast England. Then, I sat waiting to enter the Channel Tunnel as we rocketed closer to the coast. Everyone who has seen the climax of Mission Impossible knows what the Channel Tunnel is. Opened in 1994, this is a tunnel that burrows under the English Channel, moving underground. The crossing itself takes twenty minutes, and you move from England and France and vice versa. On the return ride to London, I learned some intriguing statistics. The speed record of the train is 334.7 km/h, and the length of each tunnel is 50.45 kilometers.

I sat at the window, anticipating the tunnel entry, but in fact the train passes through what I like to call “fake-out tunnels,” which are tunnels that last for a long while before returning to daylight, only to show you that you’re still in England and you haven’t reached the most important tunnel yet. When we actually did enter the Channel Tunnel, I thought it was going to pass over, but no. This was the real deal. Unfortunately, the tunnel itself isn’t illuminated, so you were staring into darkness inside a lit coach.

When we emerged onto the French side, the sunlight hurt my eyes for a second as I adjusted from our subterranean adventure. Now the Eurostar train sped up, heading for the city of Lille, the final stop before Disneyland. This was where we broke off of the standard London-Paris route and made the straight shot down to Disneyland Paris. For about an hour we sat, slept, used the clean restroom and the nice on-board concession stand, and saw the French countryside flash past. Finally, the engine slowed down and we pulled into the Disneyland Paris station. Disembarkation was simple, and the station was within proximity of both parks and several hotels, connected by a doable walk. We had made it to Disneyland Paris. Now, it’s time to investigate.