On the southern rim of the University of Texas stands a two story museum with a lobby of blue stripes like the ocean. This is the Blanton Museum of Art, which houses several collections of European and American art. Ascending the simple marble steps, we toured the second story. The American art collection was nice. The best work of the whole gallery was probably The Charge by Frederic Remington, which he created for the Knickerbocker Hotel in New York City in 1906. This shows a bunch of hardcore frontiersmen battling with pistols and horses with dusty hooves. I was more confused by the modern wing. Let’s look at this one.

It does nothing to stand out from the background, which is intentionally white to help the art “pop.” To further confuse the viewer, the painting is titled as “Untitled.” Give me something to read off of, people! If you present abstract art, at least give the smallest bit of a lead to interpret it with. I understand beauty is in the eye of the beholder and all, and I have to give the lady behind this credit. She mixed acrylic paint with that material road signs have to keep them shiny. That is why I still respect this. Where it lacked in… everything of substance or idea… it did try and experiment with new chemicals.

But the weirdest, most bizarre, most unsettling artifact in the entirety of this museum isn’t even inside the main complex. When I toured the European area, there was a diorama next to a window overlooking a strange building. And I was horrified to see a plank sticking out of the model.

For those who didn’t read my review on the Nasher Sculpture Center in Dallas, we encountered one of the craziest piece of art ever conceived. There was this huge metal plank, with no context or meaning, or even a sensible name. (Also named “Untitled.”) This was created by Ellsworth Kelly, an artist who died in 2015. It turns out, shortly before his death, he did a huge work he called Austin. Outside, in the middle of a grassy field is this large marble igloo shaped a lot like a cross. You can only access it by handing a museum staff member your ticket. You go through these huge doors- and enter an empty chamber. 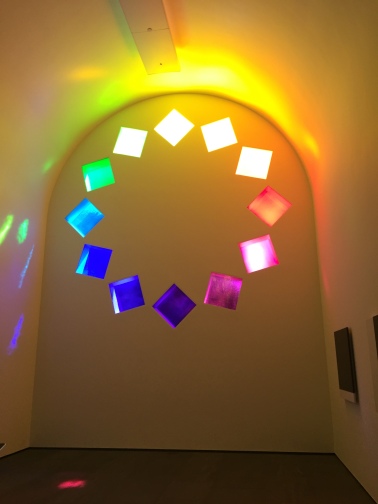 It is a sprawling, empty, acoustic edifice. It opened up into a chamber. Stained glass walls on the left was like a multicolored spinning computer wheel, and on the right was the same thing but stained glass squares. And at the very back, like an altar, in all of its random, unknown glory, was a vertical brown plank. An exact twin to the plank in the Dallas Nasher Sculpture Garden.

I couldn’t comprehend it. It’s like when those conspiracy theorists go, “Why are there pyramids in Mexico and then there are similar pyramids in Egypt and Cambodia?” I couldn’t understand how these unrelated objects- were in two separate places. I walked right over to a staff member and immediately asked what it all meant.

Cultural Clarifications:   According to the staff member, it seemed that Ellsworth Kelly was intrigued by Greco-Roman sculpture, and the plank at the forefront of this cathedral-resembling igloo was supposed to be an abstract figure of a man. The way the top widens out is reflecting the upper body of a man. With this context, the sculpture in Dallas made much more sense. I wish this information was included in the plaque at the Nasher. Now, I appreciate the abstract sense. I understand abstract art is up for interpretation, but I personally enjoy it with at least a little background on the artist’s inspiration. 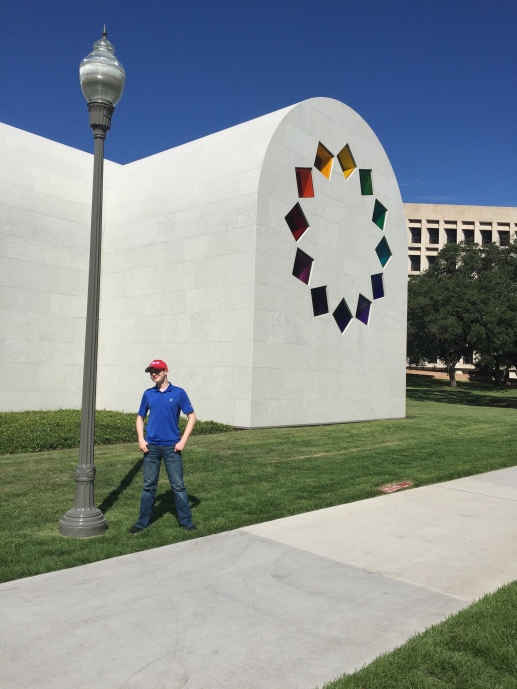 I like this art museum. It’s great to combine with a campus tour of the University of Texas. At most, I would give this place an hour, then walk along the campus. Overall, I would give the Blanton Museum of Art a grand total of 3/5 Stars.