The Eiteljorg Museum focuses on “American Indian and Western Art.” Situated within a bright red building with brilliant deer sculptures, you pay admission and walk into a two-story masterpiece of Wild West grandeur. Beginning on the second floor, we went into one of the specialty exhibits by a guy named Harry Fonseca. His works have a strange affinity towards naked wolves. There’s this one of these paintings of a wolf taking a shower, which I kind of enjoyed- although there’s still something unsettling about the subject matter.

We moved into the sizable exhibit on Native Americans, starting with the Plains Indians. One of the artifacts on display were bandolier bags of the Potawatomi tribe, which were worn by tribesmen (and if I recall my art history correctly, Native Americans wore these bags in defiance of the Trail of Tears.)  Some of these were made with materials acquired by trading with Europeans. These bags had huge shoulder straps and were used because the men didn’t have pockets in their leggings.

Another artifact was a child’s vest with swastikas on them- which before World War Two were good luck symbols in many cultures. In this case, they represent the four cosmic directions: north, south, east, and west. There was also a whole tipi set up in the gallery, with pleasant buffalo images, which I really enjoyed. When people think of a tipi they usually negatively associate it as a stereotype of Native American culture, but seeing one up close I appreciated the cultural artifact was more than just an image propagated by pop culture. 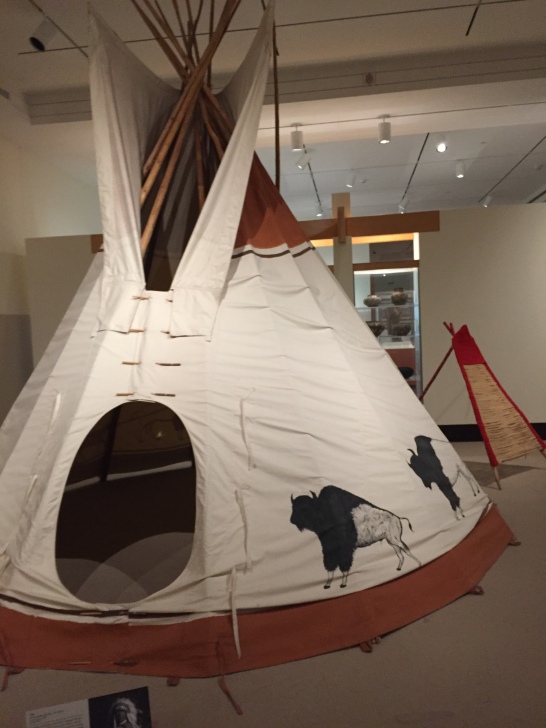 Possibly the best part of this exhibit, and one of my favorites, was the glass bead and thread design by Marcus Amerman from 2006 entitled “Buffalo Bill and Sitting Bull.” This beautiful artwork, strung together, looks fabulous and the light constantly reflects off of it. According to the plaque, the famous leader Sitting Bull briefly performed in Buffalo Bill’s Wild West Show. It appears that the two were friends, and it was interesting to learn that these historical figures of the Wild West interacted with each other. The design itself is amazing and scintillating, reflecting off the blue sky, Sitting Bull’s headdress, and off Cody’s chaps. 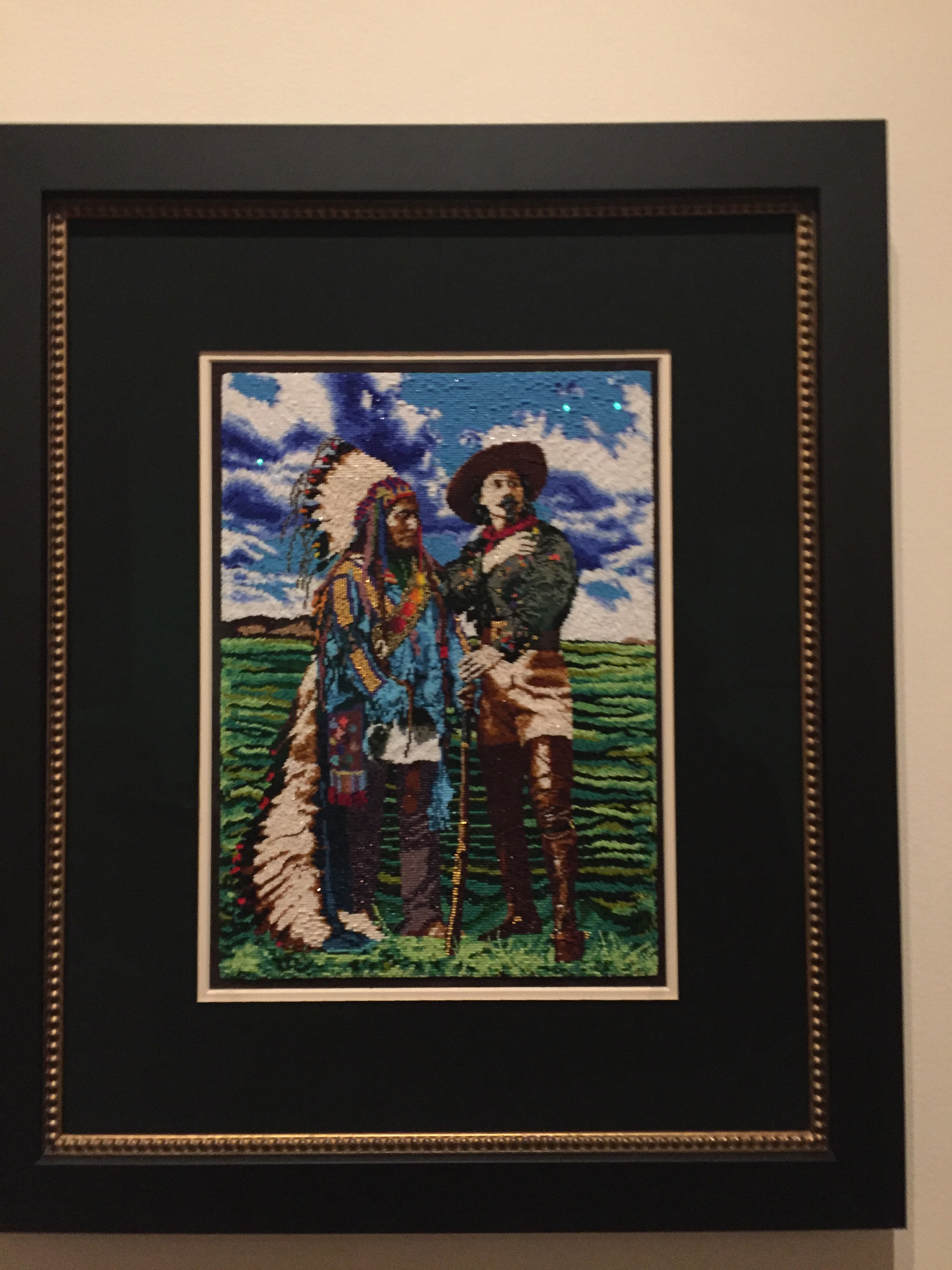 “I have to trust it will turn out correctly, and I don’t know that it will until near the end. Before that, it’s bead by bead, assigning beads to spaces, like a computer scanning. People sometimes think I do this on a computer- but I’m the computer.”

Past this, in the Plateau exhibit, is a headdress from golden eagle feathers. It’s something to see, but what made it all the more interesting was the warning sign on the plaque recommending people not to take selfies. I appreciate that they’re trying to make people more aware of how sacred these artifacts are to tribes. It makes sense they had to attach one, because otherwise you know some moron’s bound to snap a selfie angling the headdress above their head.

Perhaps the best part of the Plateau exhibit was this strange gumball machine from 1998 by a guy named Gerald Clarke. It’s titled “Manifest Destiny,” and every historian knows that Manifest Destiny is the idea that Americans were entitled to all the land all the way to the Pacific Ocean. This inevitably led to the displacement of Native Americans, the Mexican-American War, and the acquisition of the American Southwest. Anyhow, what this guy had set up was a gumball machine with all sorts of little plastic bubbles inside with paper slips defining Manifest Destiny. The tagline on the plaque read “Put a quarter in and see if you get a dollar! Something for almost nothing!” So I did and here’s what happened.

In the next exhibit, depicting the Pacific Northwest, there was a Transformation Mask, a Native American mask used during dancing ceremonies. In northwest cultures, there are ancient beliefs that people could transform between the forms of different animals. This mask is supposed to reflect that, because the wearer would pull strings on the mask. This would open up the whale facade and reveal a wolf, then a human. It’s a nice perspective on the transformation of these cultures and how they reflect relationships between humans and animals.

We finished off the second floor and returned to the ground floor, which focused on the Wild West and its landscapes. There were portraits by Georgia O’Keeffe when she first encountered the stark vistas of New Mexico, mounted Native Americans on the plains by Frederic Remington, and paintings of Yellowstone geysers. But the most enchanting part was the three-part paintings of Wilson Hurley’s October Suite, Grand Canyon. These three project simultaneously similar and contrasting views of the canyon, where you can clearly see the eroding lines formed by the Colorado River. The landscape gallery was my favorite section, with plains, bison, geysers, cattle, and canyons right out of a free-roam session of Red Dead Redemption II. 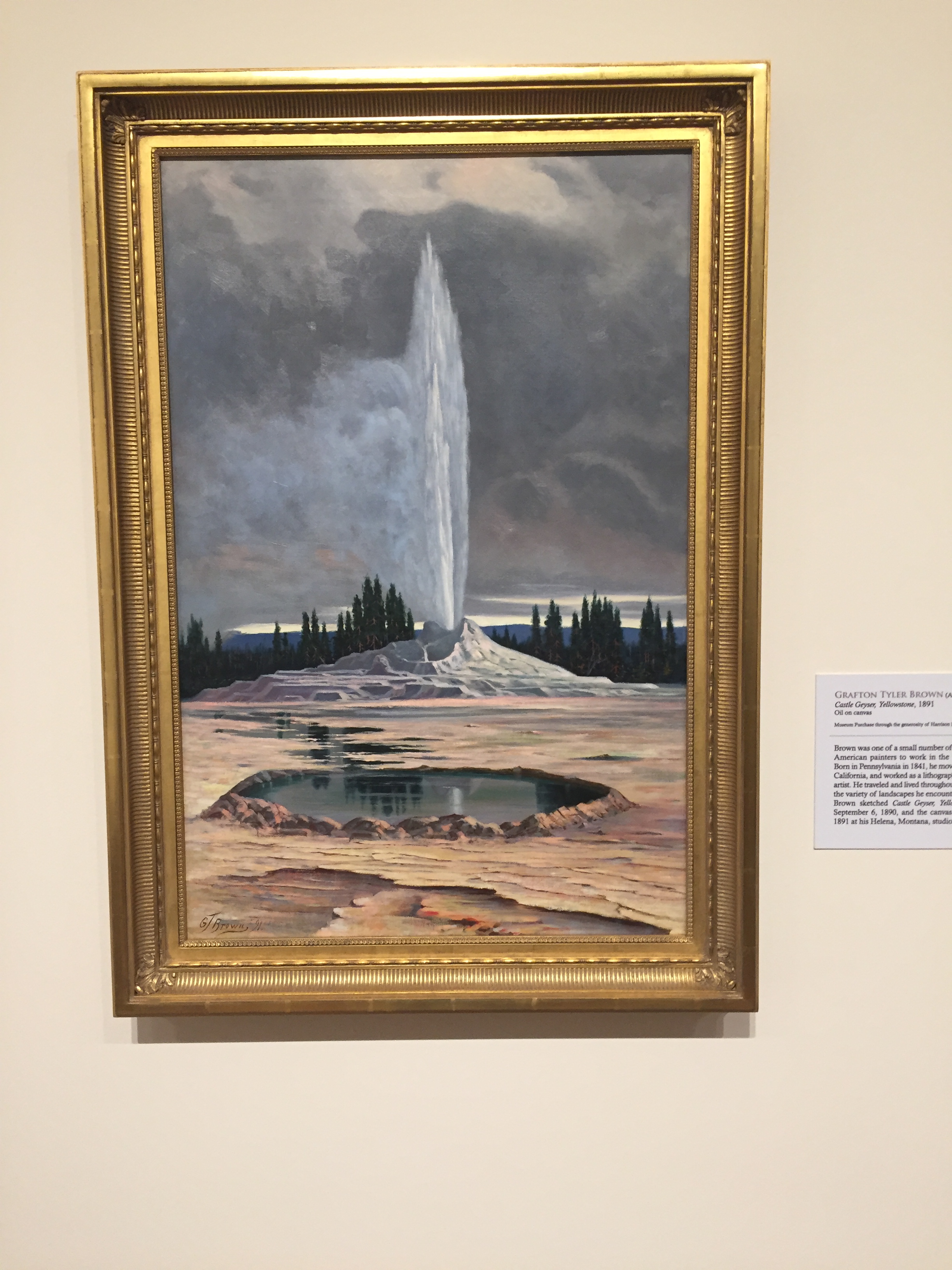 In short, everything about the Eiteljorg Museum is amazing. If you love art or history or the Wild West, this is the place to check out. When I first heard about this place, I thought it was too, well, east to showcase the western frontier. But it’s awesome, and tonally captures a bygone era straight out of a John Wayne film. That is why I give this museum 5/5 Stars.