Indiana was admitted to the Union on December 11, 1816, as the nineteenth state. Here in Indianapolis, the state’s historical and natural heritage is on display at the Indiana State Museum. There are several interesting exhibits here, including a pendulum clock, potential explanations of the Indianan nickname “Hoosier,” and the 13,500 year old skeleton of a mastodon named Fred named after the grandfather of the guy who discovered it. But the show we were there to see was part of a temporary exhibition on LEGO bricks. 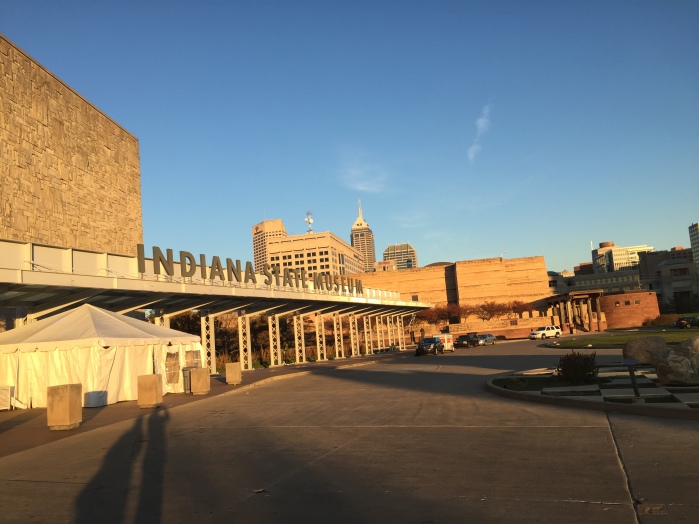 “The Art of the Brick” showcases the many works of Nathan Sawaya, who specializes in sculpture constructed of LEGO bricks. Nathan is particular in these artworks, as his pieces describe his inspirations and counts of the bricks used. He often uses famous paintings and prints and recreates them, such as the Great Wave Off Kanagawa (2,877 Bricks) and The Scream (3,991 Bricks). Even with these flat surfaces, he adds on layers so the pieces pop out of the picture in a 3-D style. There is also a whole sculpture of the Venus De Milo, too. For Sawaya’s other works, he creates original pieces like a portrait of Andy Warhol made of 1,657 LEGO bricks. 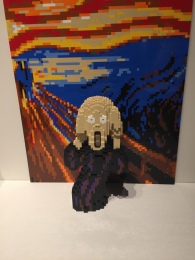 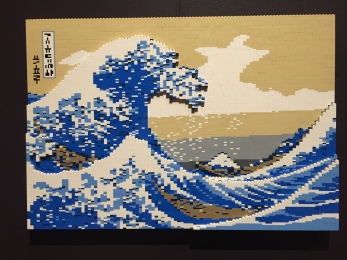 For LEGO statues, Sawaya created abstract sculptures like “Think!”, “Gray”, and “Yellow.” I enjoyed how these sculptures accommodate various LEGO shapes and bricks. Without many curved surfaces, Sawaya had to get creative to reflect round, bulging shapes and to organize them.

Some of the pieces were a little more unique than others, such as “Gray” which is a box with a person peering out, and the famous “Yellow,” a guy ripping his chest open. I had a brief but pleasant time at this exhibit and this museum. In addition to the unique LEGO exhibit, the permanent collection is neat as well. I give the Indiana State Museum and its “The Art of the Brick” exhibit a great 4/5 Stars.