With its train station close to the resorts, walking to the train to Paris was simple and easy. With trains that run frequently, the train ride from Disneyland to Paris was an hour in duration. However, I feel that this was actually a subway train dressed in another name, because as we neared the city commuters crowded the train badly. I believe that after our stop at Etoile Charles DeGaulle, the train proceeded to the financial center west of the city. When we reached our stop, we disembarked onto a congested platform deep underground. With confusing signage and congested hallways, I thought we would never make it out. But when we did, my first sight of Paris came as I pulled my roller bag up at the subway entrance, emerging from the ground to see the Arc De Triomphe, arching over the roundabout clogged with tour buses and taxis.

Moving east from the Arc, we checked into our small hotel, which was hidden in a side street, so concealed if you weren’t looking for it, you never would’ve found it. Putting our bags up, we walked down the street back to the Arc, with its array of tour buses to choose from. We chose City Sightseeing Tours, with a bus coming at an average of every fifteen minutes. We sat on the second floor, with an exposed roof, and the bus charged down the Champs Elysees, and around the Place de la Concorde, where Marie Antoinette had her head chopped off by a guillotine during the French Revolution. The bus stopped at the Louvre, but we were to get off at the Notre Dame Cathedral. The bus crossed onto the south bank of the Seine, where my brother saw an interesting string of shops, and parked just across the river from the Ile de la Cite. Overlooking a plaza crowded with tourists, the cathedral with its dual towers towered above the island. Crossing onto the isle, we joined the horrendous line of tourists extending from the cathedral doors across the length of the plaza and beginning to swing around. It was a messy, disorganized line with hundreds of people dedicated to entering the place. I will say that the line moved quickly, and while waiting I had time to appreciate the different styles of Gothic architecture and the gargoyles hanging over the sides. 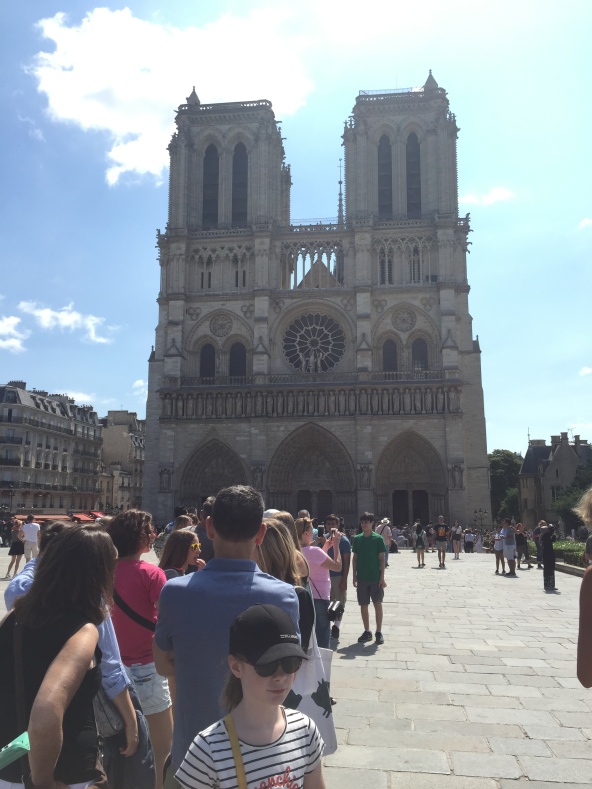 When we entered the cathedral, we were led around, staying close to the walls, as in the center there was a service in session. You could see the stained glass windows, confession booths, and small exhibits documenting the cathedral’s construction as it sprawled over the centuries to become the universally recognizable “symphony of stone” Victor Hugo called it. You’re ushered along inside Notre Dame and it took us about ten minutes to go through the whole site. It was pretty though, and I’d readily return.

However, as much as I love history, nothing could prepare me for the epic shopping strip my brother spotted from the top deck of our tour bus. Heading north towards Notre Dame, he noticed a street lined with comic books, action figures, and a building with a sign reading “TINTIN.” This made me freak out.

For those of you who aren’t familiar, Tintin is a Belgian comic book character who is a globe-trotting reporter with a real bad cowlick. He’s accompanied by his fox terrier Snowy, who is similar to Bolt in the sense of extreme loyalty and anthropomorphic behaviors, but vastly different in the sense that he can verbally communicate with Tintin as well as possessing a debilitating scotch whisky addiction. Tintin and Snowy have been traveling around the world since 1929 hunting down criminals for a good story, facing piranhas, mercenaries, sharks, Al Capone, outer space, drug smugglers, firing squads, and that one weird time when he dressed up as a jester to overthrow an unstable Latin American republic. Largely unknown in the US (except for the underrated Spielberg-directed film in 2011), Tintin was an instant phenomenon in French-speaking Belgium and neighboring France, taking readers on visual journeys through exotic locales (Chicago, India, Peru, and Shanghai, to name a few) at a time when travel was relatively limited. While some of the illustrations of groups of people haven’t aged well, like the cartoonist’s depiction of Africans in Tintin in the Congo, sold in France but not available in the US, Tintin is a veritable time capsule of early 20th-century culture and perceptions of world cultures at the time. I enjoy these comics so much because they are so imaginative and clever, and they deserve to become a household name in the US. which was why I was so excited to see several stores dedicated to Tintin on the streets of Paris.

In America, the neighborhood comic book shop is a dying breed. In preparation for this trip, I visited five separate comic and book shops near and far from my home in hopes of buying a Tintin comic for the Austin-London flight. None of them stocked him, and when they said they could order it in, it would be less convenient as buying it online. But here, in France, Tintin is omnipresent in comic books stores that flourish. On this block in Paris, stretching on Rue Dante from Boulevard Saint-Germain to Quai de Montebello. On this shopping strip, we found several stores entirely dedicated to Tintin. This was a wonderland for me, offering quality merchandise, everything from postcards to T-shirts to action figures and comics. These stores include… and I’m sure there were a few other exceptional ones in this area I just didn’t see.

The first store we entered was called Album BD, which had a huge Tintin presence as well as some other classic Belgian titles. There was one really weird one showing a Tintin crossover with Batman, which was awesome, I mean I doubt it’s canon, but it’s good to know somewhere, the world’s greatest detective and its greatest reporter are teaming up. Next door, we visited Album Comics, which was almost entirely composed of Tintin stuff. They had statues, stuffed animals of Snowy, posters, shirts, books, and EVERYTHING Tintin. Here, I bought two postcards; one of them the cover of “Cigars of the Pharaohs” and the other one of Tintin holding a camera and asking you to smile. Then I got an awesome shirt of Tintin and Snowy running. But the best souvenir I got was a black-and-white French copy of Tintin In America, the third Tintin comic. This one has Tintin fighting Al Capone in Chicago, then venturing into the Wild West and fighting a Native American tribe. I read this one in 2011 before the film came out, but it was awesome to read this one in black and white… and in French, which let me hone my skills further! I feel like I should be offended by the depiction of African-Americans, Native Americans, cowboys, and Americans in general, but after all, this was a product of its time. The original motive of this comic was to critique American capitalism in the 1930’s, and at the very least it is a veritable time capsule for what Europe thought of America. This is a great book and is illustrated so well, even in the original print, that even if I didn’t know French, I’d know what was happening.

We walked down the street, visiting several more great comic book shops. I’d recommend stopping by and window shopping, browsing, and purchasing great comics for these local shops. At the southern end of Rue Dante, moving west along Boulevard Saint-Germain, is an Italian place called La Sirena. They had great, authentic Italian pizza, which I would recommend.

From there we went north to Ile St.-Louis, a small island that was dredged from two separate islands and is not a residential island. It’s lovely to walk around, see the cafes, bridges, sidewalks, and the salted caramel ice cream at Berthillion’s. 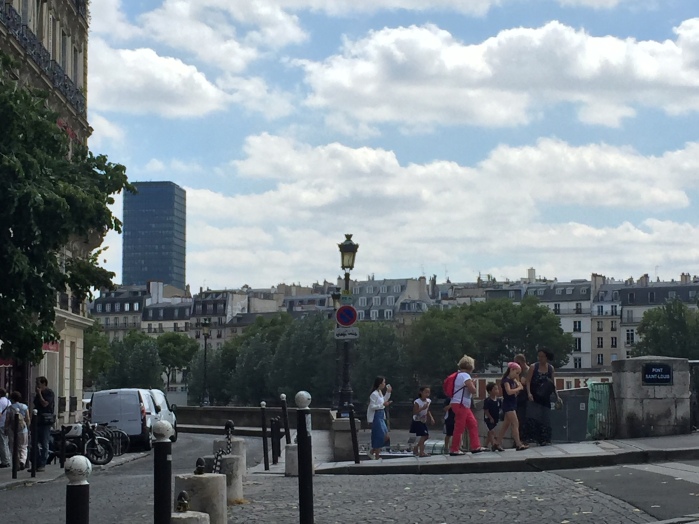 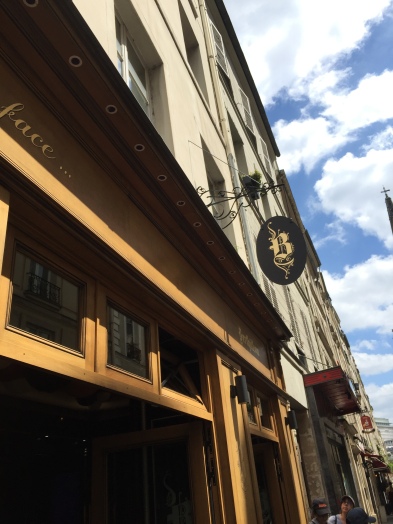 We took the tour bus, hop-on hop-off service to Hotel Les Invalides, and we saw Napoleon’s Tomb. Then it took us to a vantage power on the opposite side of the river where we could view the Eiffel Tower. But the best part of it all was going to the Arc de Triomphe. Built by Napoleon commemorating his victory at the Battle of Austerlitz. We walked up an enormous spiral staircase to the top, offering panoramic views of Paris. There were great sculptures, and at the base you could see the French Tomb of the Unknown Soldier. 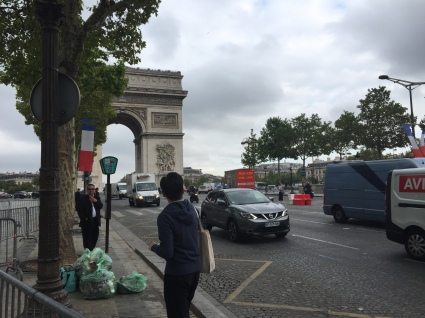 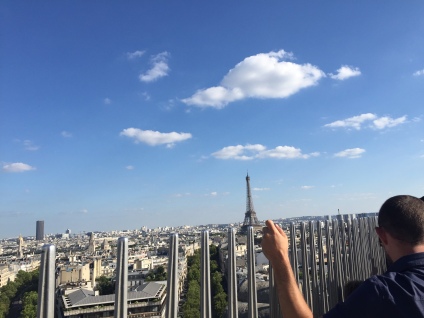 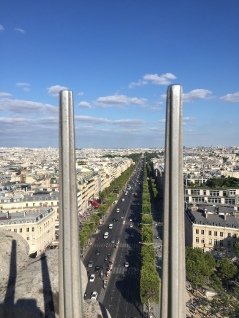 To finish off the day, we watched the World Cup match between France and Russia. The energy was amazing and it was a perfect way to end our day in Paris. 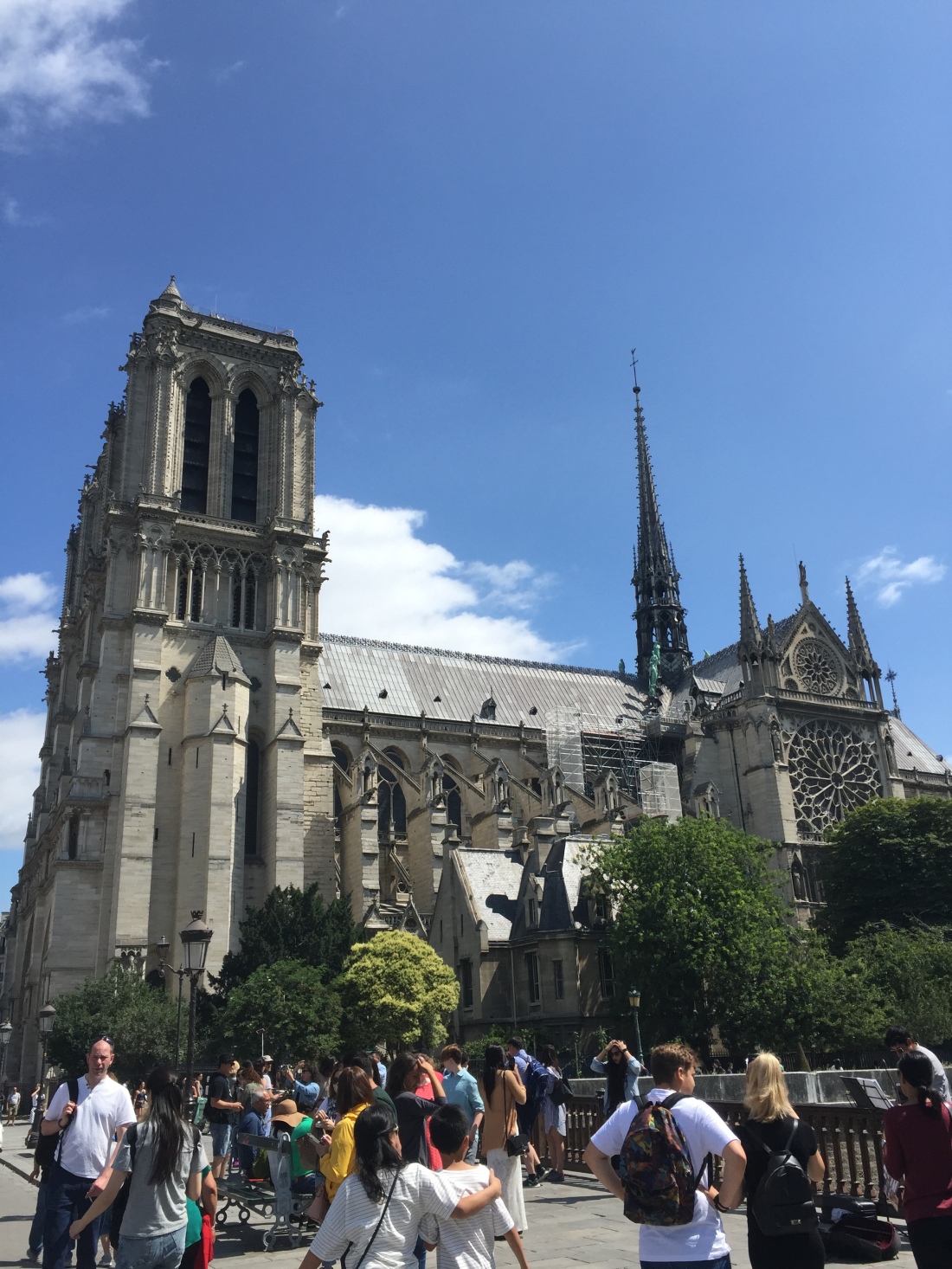