This summer when my family traveled to the opening week of Galaxy’s Edge in Anaheim, I had one thing in particular I wanted to see: The Queen Mary. Permanently docked in Long Beach, the seaport due south of Los Angeles, this vessel had an impressive resume, starting life as an ocean liner, troop transport ship, and now a museum/hotel. 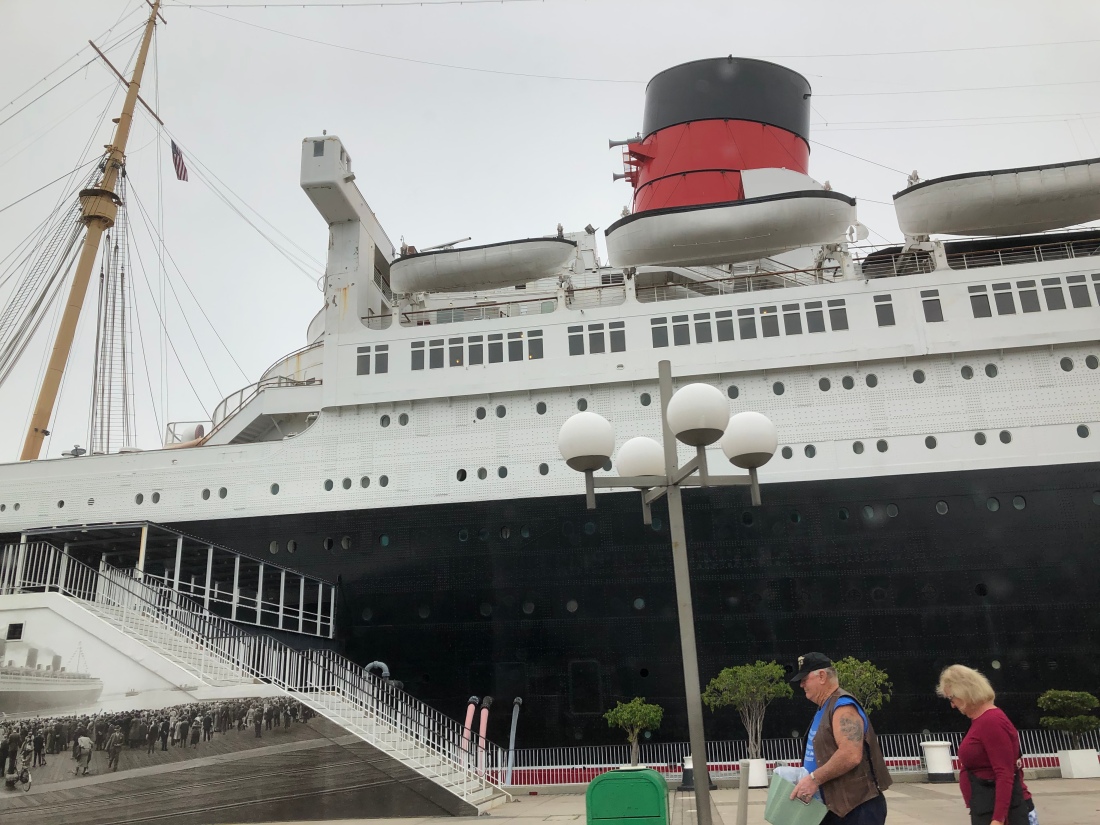 The legendary Cunard Steamship Company commissioned this ocean liner and it made its inaugural crossing in 1936. It made 1,001 crossings from Southampton to New York via the French port of Cherbourg. The ship cruised east from New York on Wednesday through the Ambrose Channel, then crossed the North Atlantic. It landed in Cherbourg on Monday and arrived at Southampton six hours later. It remained in port for 44.5 hours and turned around for the return crossing to New York.

According to the book RMS Queen Mary: Voices From Her Voyages by Nicole Strickland, the RMS Queen Mary departed Southampton on May 27, 1936. Three days before departure, 15,000 people and reporters toured the decks on the ship. Arriving in Cherbourg, the Queen Mary left with more passengers and £2.5 million of gold bullion. In the book, the luxurious voyage across the sea was described in detail.

“A three-bottle per case of bubbly (champagne) was sent to every passenger. Parties and a general fun-loving spirit pervaded the Mary’s atmosphere for the entire length of her voyage. Men and women shopped in the liner’s stores. So many passengers wanted to have their meals in the luxurious Verandah Grill that they were only permitted to reserve a table for one meal. When in the sinking location of the ill-fated Titanic, a wreath was memorably dropped into the Atlantic’s frigid waters.” 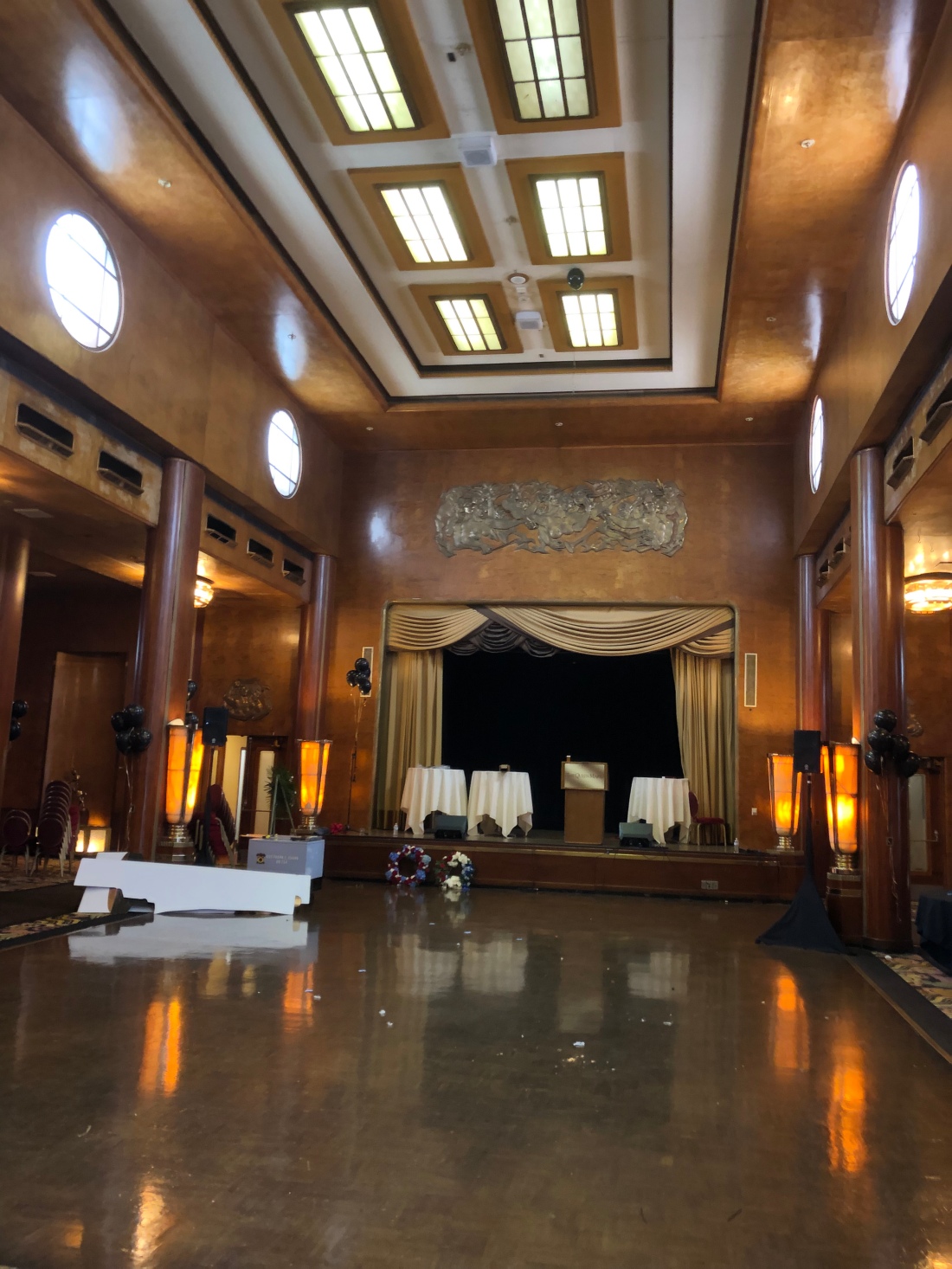 On June 1, 1936, the Queen Mary sailed up the Hudson River to great fanfare. The 29th Division Air Squadron’s planes circled the ship, and one dropped flowers on the deck. At four o’clock, the ship completed its transatlantic voyage at Manhattan’s Port 90. For thirty years the ship crossed the ocean, hosting guests from the Queen Mother to Winston Churchill. During World War 2, it served four year stint of war duty, carrying up to 15,000 soldiers per voyage. Nicknamed the “Grey Ghost,” there was talk of a conversion into an aircraft carrier, but it was instead outfitted with 40 MM machine guns.

We boarded the ship, and you can observe its Art Deco halls and architecture. Unfortunately, the ship itself is a bit rundown, with dated carpets, peeling paint, and an abundance of litter bobbing in the water beside the ship. The elevators looked like something from the Tower of Terror, so our only option were the stairs. I think they need a renovation to restore the Art Deco splendor that made this ship cutting-edge back in the day. I will say that the displays are informative, and the presentation and ship models are wonderful.

The information I can find is scant, but various videos state that the Queen Mary was a filming location for the 1972 disaster film The Poseidon Adventure. I can’t personally verify this, but according to IMDb, the Queen Mary was the inspiration for the S.S. Poseidon. The trivia section states that the author of the novel upon which the film is based, Paul Gallico, sailed on the Queen Mary. One day, a wave struck the ship, sending people and objects flying. The story continues by saying that Gallico, wondering what would happen had the ship tilted a little further, wrote the book that led to the movie.

Anyways, don’t forget to go downstairs, where you can see a preserved office where guests could book future cruises. A map on the back shows the short-hop flights of mid-century airplanes, and brochures advertise round-the-world cruises in 1955. Outside, displays show a specialized kosher menu and plates from the dining service.

There are several gift shops on-board with well-stocked merchandise. I myself bought the book I mentioned above, as well as a scale model of the ship itself.

I worry about critiquing this attraction, because it is by no means bad. But for all the historical significance, I expected it to be in much better condition. It direly needs a renovation that can update the halls and structure, without sacrificing the Art Deco details that made the Queen Mary so cutting-edge in 1936. That said, any maritime historian needs to visit this ship, as it shaped the Golden Age of Travel itself. Therefore, I give the Queen a decent and respectable 3/5 Stars.