I took a short, last-minute cruise from Galveston, Texas, on Royal Caribbean’s Liberty of the Seas. On the eight-day cruise, we visited three ports. After driving into Galveston, about an hour’s ride from Houston, we spent the night in the port before boarding our ship.

A little history for Galveston. According to Encyclopedia Britannica and the city’s own tourist website, the first European in the area was probably Cabeza De Vaca in 1528. (He was the guy on a failed Spanish expedition who washed up and made contact with Indian tribes before making his way to Mexico.) He left soon after, but years after Spain returned.

Bernardo de Galvez, Spanish governor and secret ally of the American Revolution, sent a mapping expedition on the Gulf Coast.  (Galvez supplied Louisiana with Texas longhorns and helped the rebels via the Mississippi River. His efforts to fight Britain on the Gulf Coast makes him a rarely-mentioned hero of the American Revolution.) He sent out Jose de Evia to chart the coast, and on July 23, 1786, the expedition reached Galveston Bay and named it (and later the island) after the Spanish colonial governor. Before official settlement of the island it was the base of Jean Lafitte in 1817, the pirate who helped America defend New Orleans in the War of 1812.

Galveston was incorporated in 1839, and quickly became the largest port west of New Orleans. During the brief independence of the Texan Republic, Galveston was the temporary capital of the country. It also hosted the Texan Navy, which constituted of four ships. It was an important Confederate port and changed hands twice during the Civil War. 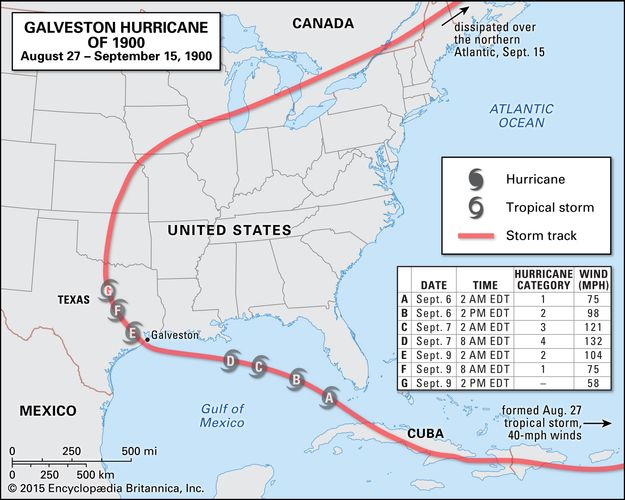 Galveston continued to be a major port in the Gulf of Mexico, but its reign of maritime was cut short by the Galveston Hurricane of 1900, one of the deadliest natural disasters in American history. It was a category 4 hurricane that made landfall on September 8, 1900. It demolished the port and took 5,000 lives. Galveston recovered and made a seawall that protected it from further storms, but the setback coincided with a second factor that doomed the town- the opening of the Houston Ship Channel in 1917, making H-Town the more viable seaport.

According to TIGHAR, which is an organization for aviation history, Fred Noonan lived here in 1921. Why is he important? He was the navigator in the cockpit alongside Amelia Earhart when she disappeared over the Pacific.

The city had a short resurgence during the twentieth century, where it became a nightclub hot spot and gambling den. That all came to an end when Texas Rangers raided the town on June 10, 1957, taking axes to slot machines. The town slumped until the eighties, when an urban renewal project rescued the town. Now it serves as a seaside destination for Texan families with its boardwalk, beaches, and cruise port.

We got a good deal at the Hotel Galvez, built in the Spanish Colonial Revival style and named after the Spanish governor. It was built to help the local economy after the 1900 hurricane. It was decent, with a small museum exhibit, but the mattresses felt so lumpy it was like they were there since opening day.

The waterfront is nice, and you can see the post-hurricane seawall and the foundations of a washed-away nightclub. There’s a boardwalk called the Pleasure Pier, but it was ten bucks to even look around, so we declined to go in.

The next day we boarded Royal Caribbean’s Liberty of the Seas, docked at the Galveston Cruise Port. The terminal is built on the inside of Galveston Bay. We broke from the dock at four, exited Galveston Bay by rounding a spit of land, and we entered the Gulf of Mexico for the two-night sail to Cozumel.