The Bishop Museum, located in a residential neighborhood of Honolulu, doesn’t look like much from the outside, and the gift shop is small. But once you leave the visitor’s center, you enter one of the world’s greatest museums. This is because the Bishop Museum is the world’s landmark institution for Hawaiian and Polynesian culture, with more than 24 million cataloged items.

Charles Reed Bishop established the museum in 1889, during the late stage of Hawaiian sovereignty, in honor of his late wife Bernice Pauahi Bishop, a Hawaiian princess. Starting with a collection of royal heirlooms, the place expanded into a full-blown masterpiece detailing the culture of the Hawaiian Islands, and with a separate gallery reserved for items of the general Pacific Islands. 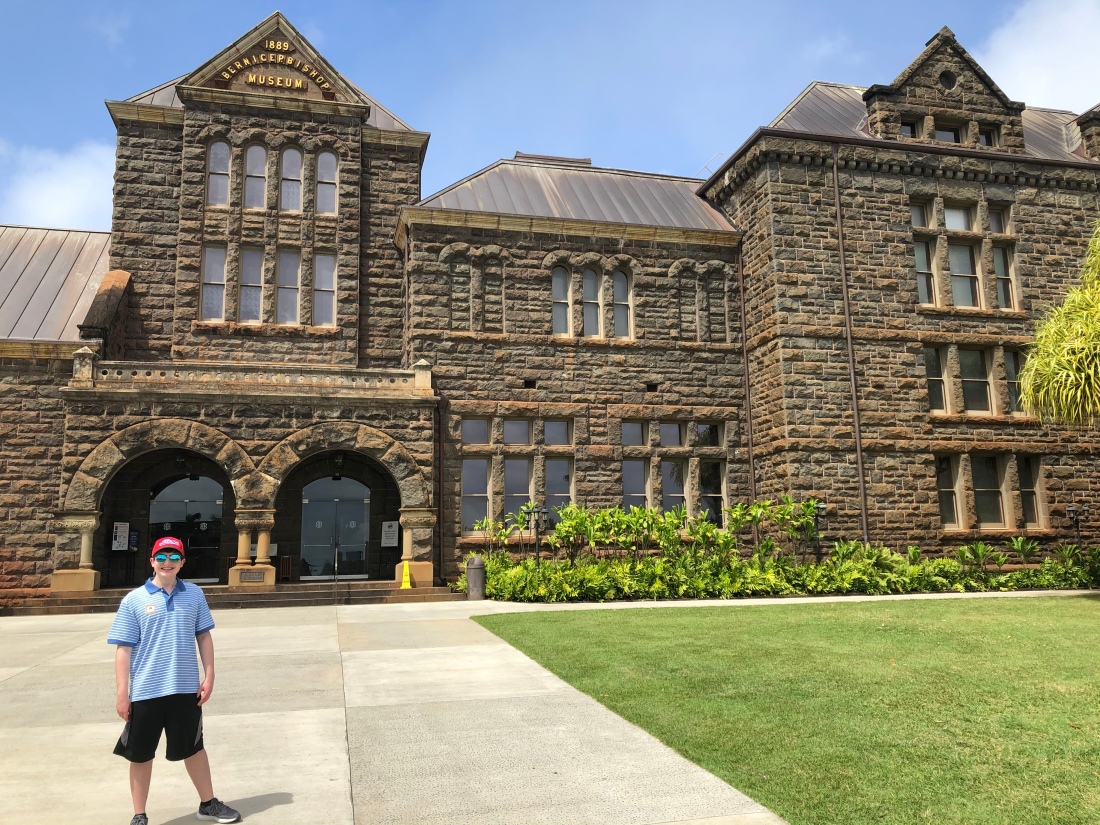 Once you enter the Victorian stone house, turn right and enter the astounding Hawaiian Hall, an atrium of three floors with railings and diagrams, including suspended models of ‘iwa birds, whales, and outrigger canoes. Based on the visitor’s center, I feared the hall to be dated and rundown, but was encouraged by stellar lighting, organization, interactive displays and facts. In the Hawaiian Hall, see stone statues, tikis, and idols. A map of the Pacific shows various models of fishhooks and their differences across the Polynesian islands. Look for a basalt adze- it doesn’t look like much, but it was found in the Tuamotu Islands… but it was quarried on Hawaiian’s Kaho’olawe Island, demonstrating the Polynesian voyagers and trading networks spanning thousands of miles of ocean. 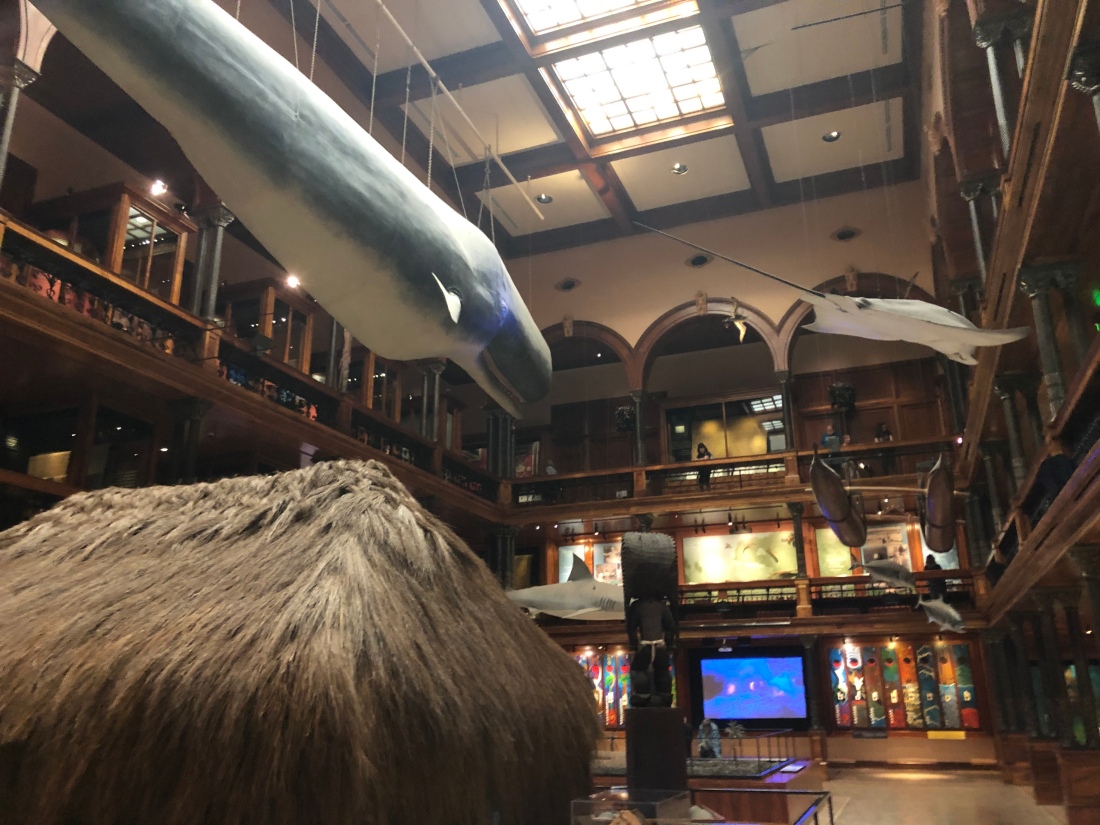 The best object in the collection is here- the mahiole (crested helmet) and ‘ahu’ula (feather cloak) given to Captain Cook by the high chief Kalani’opu’u in 1779. A huge art history artifact, the feathered cloak was reserved for royalty- and in this occasion, Cook was mistaken for the god Lono, who was said to return to the islands on a ship with strange sails. The helmet, cape, and a half dozen textiles made from bird feathers. The rarest were the yellow ones, from the ‘o’o bird, which were black with one yellow feather under each wing. Birdcatchers harvested these rare feathers and released them so they could regrow! These garments were some of the most valuable in all of Hawaii, and after being gifted to Cook, they have made a long way round back to Hawaii. (PS: Along with the chief, several members of the ali’i, ruling class, were allowed on board Cook’s ship. One young man, impressed by English weaponry, was the soon-to-be-king Kamehameha, with which this technology was able to unite the Hawaiian Islands by 1810!) 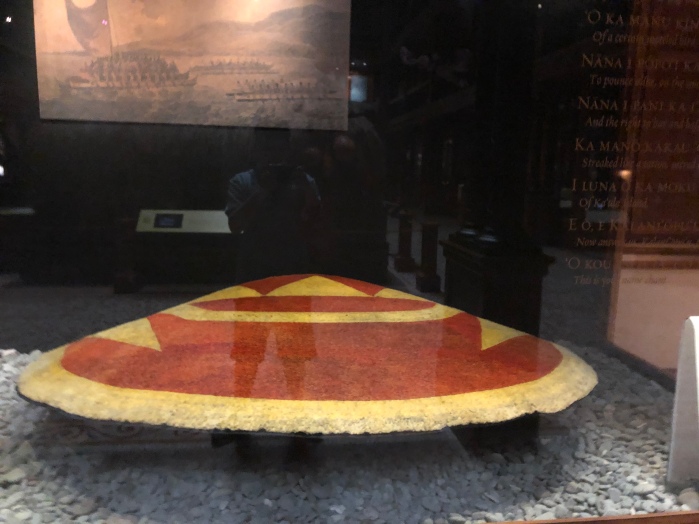 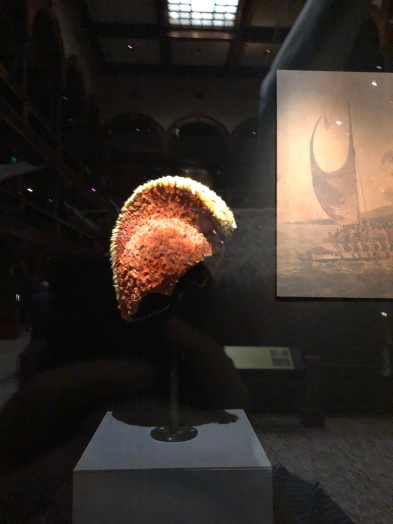 Further exhibits show Hawaiian agriculture, foraging, festivals, and the unique Pacific pantheon. One display that caught my attention regarded Hawaiian warfare, and how rulers were trained in various combat techniques. Few are aware that Hawaii has its own martial art, the lua (bone-breaking.) Kahemameha was taught how to dodge spears and catch them in midair. Many Hawaiian warriors used the lei-o-mano, a club studded with shark teeth.

The other grand hall of the building, centered on the Polynesian cultures, specifically their explorations. There is a wall of the canoes and ships of ancient Polynesians, which relied on tides and the night skies to navigate, over millennia, from the Philippines to Tahiti and Hawaii. One of the famous Polynesian ships, the Hokulea, was made by local historians in 1976 and made an impressive voyage between Hawaii and Tahiti that year.

The best map by far was a map of Polynesian voyaging routes, and beneath that is a timeline of various stone added. It’s interesting because it shows the evolution and widespread existence of trade in the Pacific. 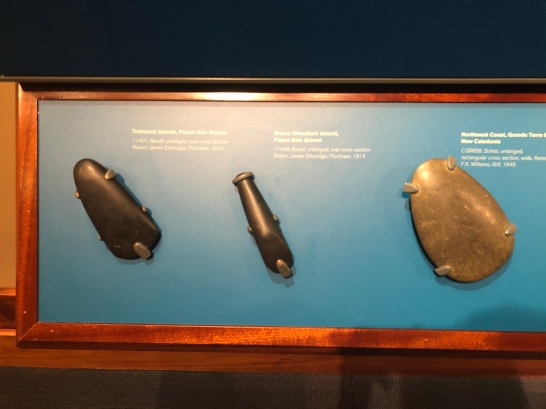 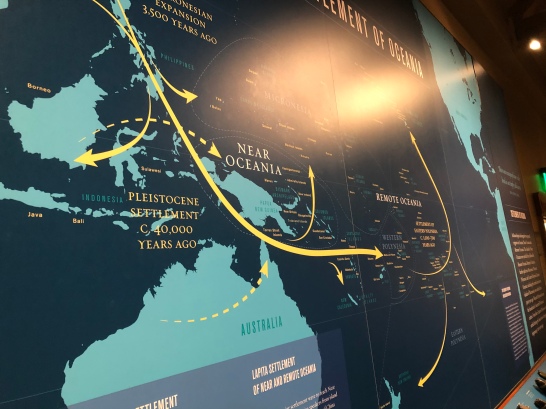